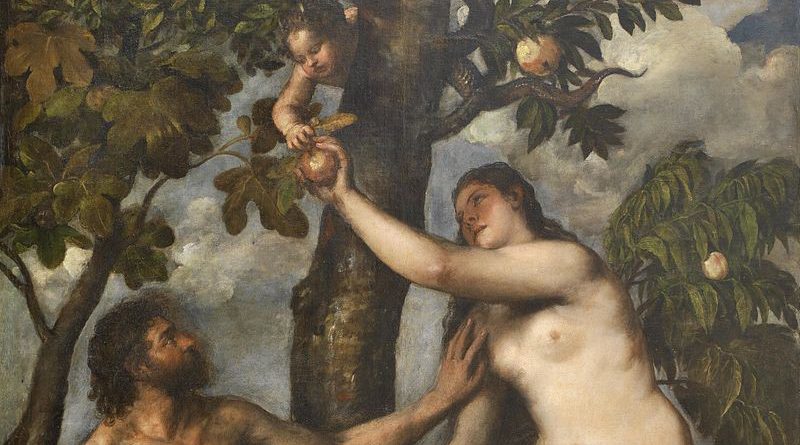 From Titian, Adam and Eve. From Wikimedia Commons.

This post is just going to be a grab bag of quotes from some well respected dudes who are/were concerned about the pastoral implications of identifying same-sex attraction or temptation with sin.  I’m not necessarily endorsing anything here.

This is from 2012.  If he’s gone on record with different view please let me know.


This is a call for careful distinctions lest you hurt people — or yourself — unnecessarily. All our disorders — all our brokenness — is rooted in sin — original sin and our sinful nature. It would be right to say that same-sex desires are sinful in the sense that they are disordered by sin and exist contrary to God’s revealed will. But to be caused by sin and rooted in sin does not make a sinful desire equal to sinning. Sinning is what happens when rebellion against God expresses itself through our disorders.

on same-sex attraction particularly (in What Does the Bible Really Teach About Homosexuality, 145):

“As for the particularities of same-sex attraction, given the exegesis in this book we have to conclude that even unwanted homosexual desires are disordered (and if the desire is tantamount to “lustful intent”, then sinful.)” (emphasis mine)

And more generally on temptation here:

First, many Christians go through life with a weight of guilt and shame for temptations that feel like sins, but aren’t themselves sinful. Take lust for example. A man addicted to pornography is sinning. A man fantasizing about a woman’s appearance is committing lust in his heart. But what a man who notices a woman is attractive and then hesitates whether to look longer and think deeper about what he just saw? That’s likely a temptation and not a sin. Think about David and Bathsheba. Assuming he was on the roof minding his own business, it wasn’t wrong for something to register in David’s brain that the woman his eyes happened upon–again, assuming he just happened on the sight–was attractive. The problem was that he then sent and inquired about the woman. This is desire giving way to temptation, on the way to sin and death.

in an interview with Desiring God:

I think the other thing we need to remember is there is a distinction between temptation and sin. We see that in the Bible in the Lord’s prayer. We need to be delivered from our temptations, but we need to be forgiven for our sins. James reminds us that temptation gives birth to sin (James 1:15). It’s not itself sin. So the two are not the same thing. When we’re tempted, we need to flee temptation and to stand faithfully underneath it. I take it that it’s possible, therefore, to be tempted without sinning.  We’re not told that as we grow as Christians temptations will just disappear from life. We are promised that God will enable us to stand under temptation. I want to say that the presence of temptation is not itself a sin.

James tells me that when I experience temptation, I shouldn’t blame God. I shouldn’t say, “Well that’s God’s fault that I’m tempted in this way.” I need to recognize the ways in which my own temptations are a reflection my fallen nature. They come from my own desires.  But I don’t think it’s right to say that having the capacity to be tempted is itself a sin. It’s a sign of our fallenness, but I want to repent of the ways I sinfully respond to temptation. I want to flee temptation itself. Otherwise, you’re saying to somebody, “Even if you’re not sinning, you’re still sinning, just because you’ve got the capacity to be tempted in a certain way.”

Now, such temptations as these are dreadfully painful to a child of God. He cannot bear the poisoned breath of sin; and when he finds that sin stands knocking at his door, shouting under his window, pestering him day and night, as it has occurred with some,—I hope not with many,—then he is sorely beset, and he is grievously troubled.

It may help such a person if I remind him that there is no sin in being tempted. The sin is that of the tempter, not of the tempted. If you resist the temptation, there is something praiseworthy about your action. There is nothing praiseworthy about the temptation; that is evil, and only evil; but you did not tempt yourself, and he that tempted yon must bear the blame of the temptation. You are evidently not blameworthy for thoughts that grieve you; they may prove that there is sin still remanining in you, but there is no sin in your being tempted. The sin is in your yielding to the temptation, and blessed shall you be if you can stand out against it. If you can overcome it, if your spirit does not yield to it, you shall even be blessed through it. “Blessed is the man that endureth temptation.” There is a blessedness even in the temptation, and though for the present it seemeth not to be joyous, but grievous, nevertheless, afterward, it yieldeth blessed fruit to those who are exercised thereby.